The Big Apple. The Empire State. NYC has a plethora of nicknames and songs featuring its cultural extravagance from food to people to scenery. After a food-filled trip, my belly is full and ready to share my top bites from our stops.

Brick oven pizza is unmatched as you smell the welcoming smoke from the fire before biting into the crisp crust. The fat from the spicy salami melted blissfully over the pizza so every bite had a bit of salami goodness running through it. 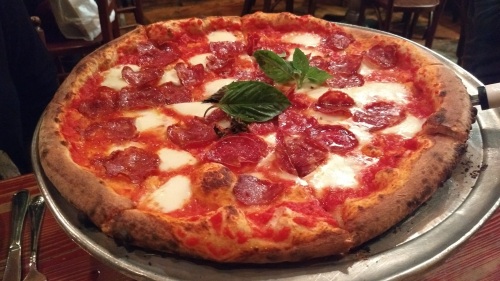 Ugly delicious has never looked better. Stewed peaches, fennel, tomatoes and dill. Who would ever think to mash these items together? Thank you luncheonette heavens for making this hot veggie side dish take center stage.

It was hard to choose just one item, as we tried 7, but I may have chosen this simply because I was #DressedToKale. The luscious pork was balanced perfectly with the kimchi, apple slaw and, of course, kale. Hard not to keep from licking our plates after this banger.

Dressed to kale with a side of kale

This bowl easily slid into top 5 best bowls of pho I’ve had in my life. The broth was as every pho broth should be; clear, while having the depth of five spice flavor. I stopped at nothing in my quest to not waste any drops of soup.

Not only were these buns absolutely adorable, the filling was surprisingly unctious. If you’ve ever had apple butter, just imagine a carrot butter version and that’s exactly what was inside these little piggies.

Food smiles continue, no matter where we land